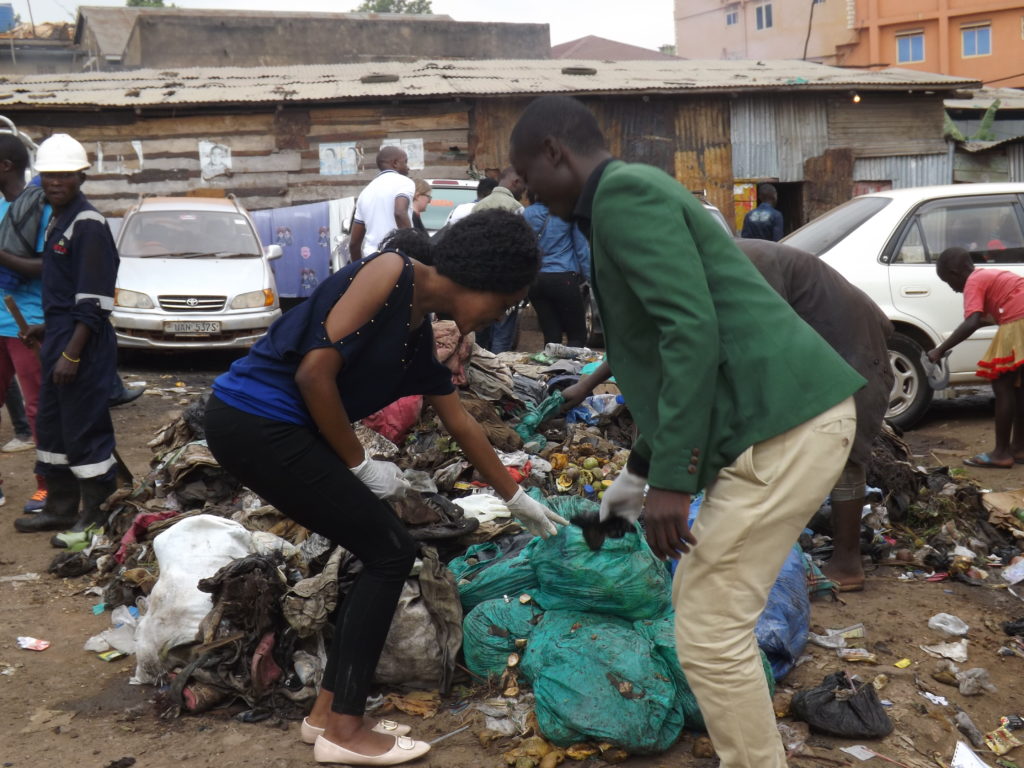 The UK team fully engaging in the clean up exercise.

Clean up exercises in the city are part of the planned build up activities leading to the National Youth Congress to demonstrate to cities the need to plan for smart health care for self and for the community in order not to leave anyone behind. The city has to take lead in these activities in order to show need to engage communities in participating in programmes to enhance sustainability and resilience.

Adequate access to water has numerous benefits including freeing more time for women and girls to devote to education, income generation and consequently better livelihoods (GWTF, 2005). Water can be perceived as a crucial pre-requisite for the maintenance of proper hygiene and sanitation. According to the Inter-Agency Task Force on Gender and Water (GWTF, 2005), over 2.2 million people in developing countries die due to preventable diseases caused by inadequate sanitation and hygiene. Since the 1940’s, there has been a steady growth of urban centres and urban population in sub-Saharan Africa. Unfortunately, there has not been a corresponding increase in the provision of water and sanitation services during the same period. It is estimated that by the year 2008, 2.5 billion worldwide lacked basic sanitation (Engeler, 2008).

The need to improve access to water and sanitation for both men and women dates far back to the 1977 United Nations Water conference, the International Drinking Water and Sanitation Decade (1981-1990), the Dublin international Conference on Water and the Environment (1992) also implicated in the Water for Life Decade (2005-2015) and the Millennium Development Goals (MDGs). Over the past decade, the government of Uganda has taken numerous efforts to scale up sanitation and hygiene such as putting in place; the Kampala Declaration for Sanitation (1997), signing of the sanitation MOU (2001), and setting up the National Sanitation Working Group. However, aside all these developments, improvements have been slow compared to MDG and PEAP targets (72% and 80%).

Young people have a vital role to play in solving the water-related problems addressed by water ministry, water service corporations and have the ability to bridge divides. The NYC2018 will provide the space for youth add their voice to the Right to water (Access to Clean water and sanitation SDG6#) and to strategize by sharing on ideas for proper hygiene, water for production facilities and to propose actions for wetlands management/governance.

Video Of The Month

© 2022 Training, Education & Empowerment for Neighborhood Sustainability in Uganda. All rights reserved.
Website Updated by King Denis · Back to top